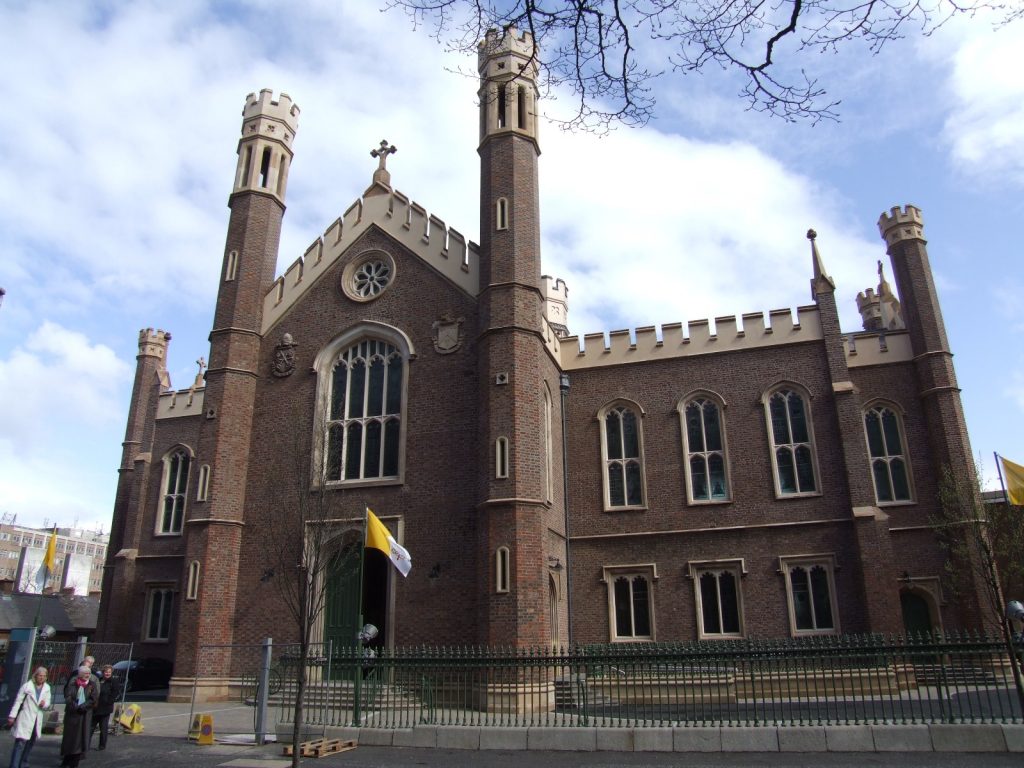 St. Malachy’s Roman Catholic church on Alfred Street is a Grade A listed building which stands proudly within the Linen Conservation Area, and is widely regarded as being one of the most interesting churches in Belfast, if not the most important late-Georgian building in the city.

Built in the 1840s to the designs of Thomas Jackson, following an architectural competition, it has stylistically been described as ‘Tudor Revival’, ‘castellated Gothick’, and, most vividly of all, by Sir Charles Brett, as “a superb example of Sir-Walter-Scottery at its most romantic”.

The land upon which the church stands was acquired by Bishop Denvir in 1839, and its wonderful interior decoration, particularly the extraordinary ceiling plasterwork, was made possible thanks to a bequest from a Captain Thomas Griffith (who is memorialised in the porch). Originally intended to be a Cathedral the immediate onset of the Great Famine meant that these plans were scaled down markedly.

It is cruciform on plan with a gabled, centrally placed projection on the front elevation which contains the main entrance door. This is flanked by castellated topped turrets with shorter versions at each corner of the building. Internally, the altar piece is placed centrally on the long wall, while the altar rails and pulpit were 1926 replacements for the original unpolished Irish oak versions. A large raked gallery occupies the other three walls.

St. Malachy’s not only plays an important spiritual and social role in one of the oldest parts of the city centre, which has undergone a dramatic physical transformation over the latter-decades of the 20th century, but it is also a significant architectural landmark, perfectly framing the view down Clarence Street. Its reopening in early 2009 following an extensive restoration scheme will give equal pleasure to the congregation and visitors alike.