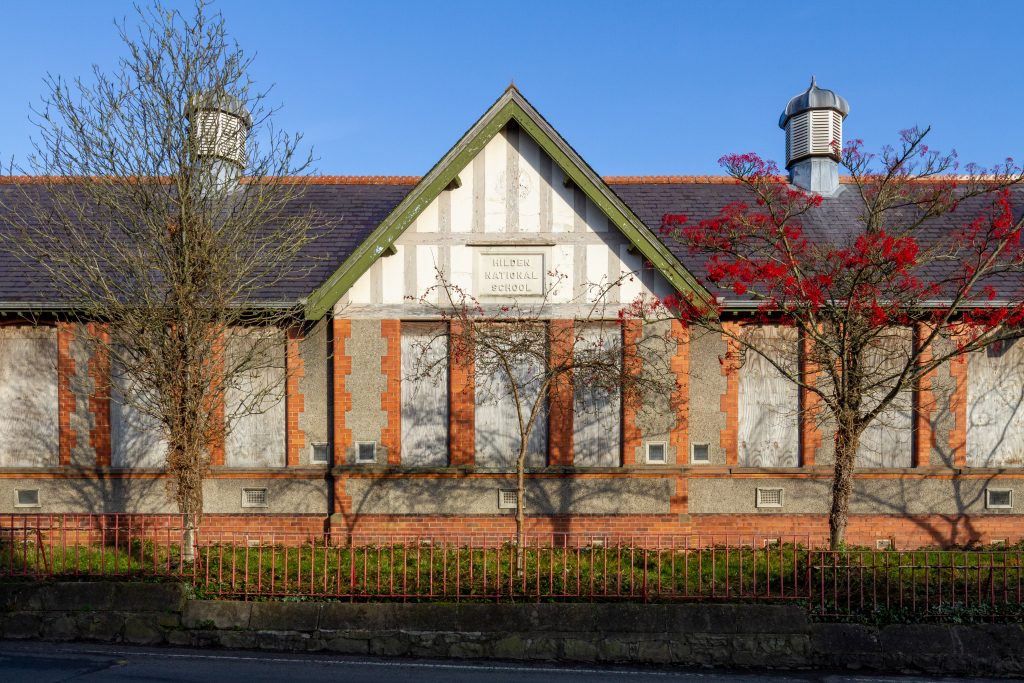 Hilden National School is one of the oldest schools in the Lisburn area, dating from 1913. Formerly a private National School which was established by the Barbour family who owned Hilden Mill. 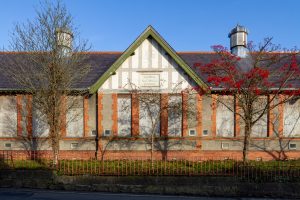 Speaking with Adrian Bird of the Resurgam Trust he notes that “In 1898 John Doherty Barbour brought together his father’s various linen firms to form the Linen Thread Co Ltd, which became the world’s largest linen thread producers. John Doherty Barbour died in 1901 and was succeeded by his eldest son Sir Milne Barbour who would have been Chairman and Managing Director of the firm at the time the school was built.”

“As employers of large numbers of people Messrs Barbour took their responsibilities towards their workforce seriously. It is understood that the company employed over 5,000 people and they took an active interest in their social well-being, building houses and schools at Hilden; with this interest evidenced already in the building of a previous school, designed by Young & Mackenzie, in 1879. Hilden National School was designed by William John Fennell and built by Thornbury Bros – built in a mock Tudor style, with a symmetrical front elevation. Messrs Barbour sought to implement a school ‘for the benefit of their workers’ children’. Whilst plans were submitted by February 1910 and the tender of Thornbury Bros was accepted soon after, there was a considerable delay in starting to build the school due to awaiting the grant from the Commissioners of National 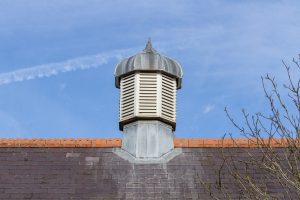 Education. The Irish Builder reported that work begun in December 1911.”

The school underwent a full refurbishment in 1996, and despite being Northern Ireland’s first integrated Primary School it closed in 2008 due to the aging building fabric and the area based rationalisation of primary school provision in the area. Since 2008, when added to the Heritage at Risk register, the Grade B1 listed building remains at risk and has been subject to anti-social behaviour and arson attack in 2015. 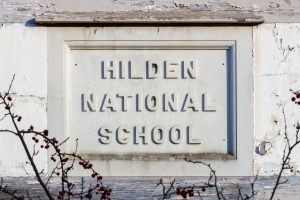 Since Lisburn and Castlereagh City Council purchased the building from the Education Authority in April 2016 they have appointed the Resurgam Trust as their development partner where their partnership has led to the successful bid of a Stage One application to the National Lottery Heritage Fund (NLHF), where both Resurgam and the Council appreciate this assistance and support from the NLHF as both organisations endeavour to take the project forward to a successful conclusion. Adrian said “we have currently entered into our six-month development stage which will see planning applications submitted for the restoration of the building and the business plans for the new social enterprise developed. We hope to bring the old school back to life ensuring that we retain as much of its natural beauty and characteristics as possible. Not only are we going to ensure that the listed building is saved but we aim to establish new Social Enterprise and generate employment. We plan to develop a new childcare business, a tea rooms and an archive of local history. We will link with Lisburn Museum and develop a local history trail which will go from Lisburn Museum in the centre of Lisburn City and finish at the Hilden National School.” 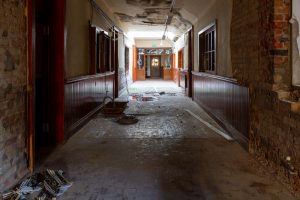 The school has sparked great local interest as it is envisaged that investment into the building will pay back to the community in many ways including much needed facilities and employment opportunities, while also saving a piece of significant local heritage. The retention of heritage buildings is of importance, not only to fulfil statutory policies but to preserve and collect the history of an area, Adrian mentioned that of this the Trust “feels that it is extremely important that we do not sit back and permit our old buildings to fall into disrepair or dereliction. Where possible the Resurgam Trust are keen to address dereliction and in doing so generate employment. During our community consultation we met many former pupils, teachers and the lollypop lady. We also met the authors of a fantastic book on the school called, “Hilden, The story of a school and its community” written by Margaret Hanthorne and Ann Ferguson. This book is a fantastic resource and gives lots of personal accounts, memories and stories from those who attended it.” 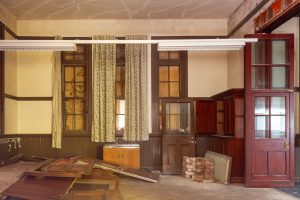 repair and in use. The working partnership between the Resurgam Trust and Lisburn and Castlereagh City Council highlights the age old thought that the best chance for an ‘at risk’ building to be saved is by way of a change in ownership, which catalyses ideas for reuse. Though the development plans are at a relatively early stage for the school, the ethos of reuse, restore and regenerate are at the core of this project and it is hoped that in the not too distant future the building will be brought back to life for the benefit of the community.